An Introduction to Cusco

Located at an altitude of 3,360m above sea level, Cusco was referred to as the ‘Navel of the World’.

The city has a long and interesting history dating back to 1200AD and linked to the first Inca ruler Manco Capac. However the city saw its expansion in the 15th century under the rule of the greatest Inca Pachacutec, who led a drive that spread the boundaries of the Inca empire as far south as Chile and Argentina, and north to include Ecuador and Columbia. This rapid expansion abruptly came to an end on the arrival of the Spanish Conquistadors, led by Francisco Pizarro who, following the murder of the Inca Atahaulpa in Cajamarca, marched into Cusco in 1534 and added it definitively to the realms of King Charles V. This invasion opened the gates to a cultural mix that has left its imprint on every aspect of Peruvian culture, especially in the ancient Andean capital of Cusco.

The most impressive combination of Inca and colonial architecture is the Koricancha temple, attached to the Santa Domingo church. Koricancha was one of the most important Inca temples—the walls were actually covered in sheets of gold. Though the gold has long been melted down and pilfered away, what remains is almost as impressive: the most meticulous motarless Incan stonework ever discovered. The perfect stone blocks and trapezoidal doorways—built for their ability to sustain earthquakes—fit so smoothly together that the adjoining colonial stonework looks sloppy and juvenile in comparison. 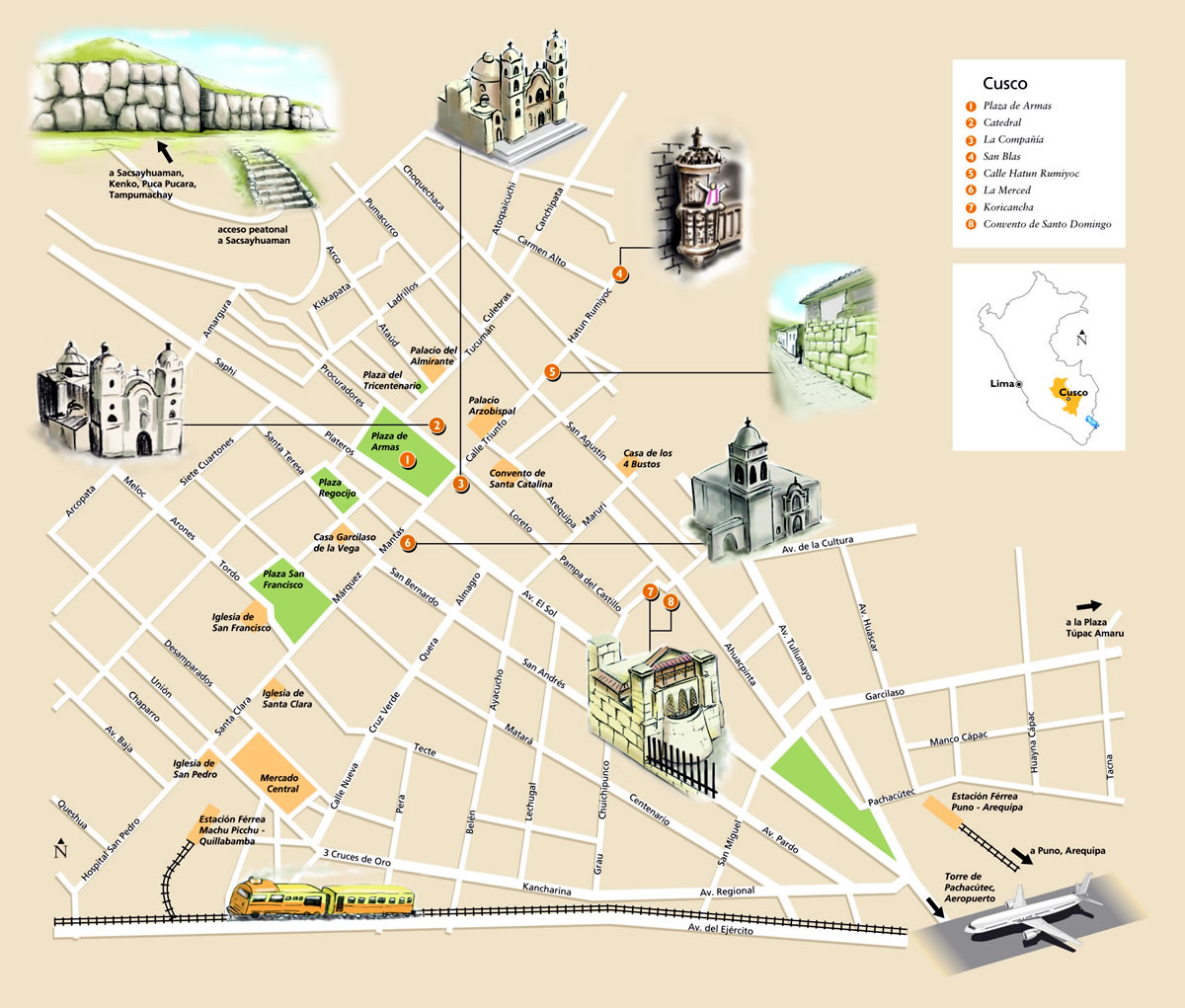 The outskirts of Cuzco are strewn with Inca ruins as well, the largest being Sacsayhuaman, a sprawling complex that served both ceremonial and military purposes. The stones used in its construction are consistently larger than any other per-Columbian structure. Estimates place the largest stone block at up to 300 tons. Neighboring ruins include the water ruins of Tambomachay, the ritual site of Q’enqo, and others.

Although it is the old Cuzco that attracts visitors, it is the modern Cuzco that keeps them comfortable. Seamlessly fitted into cobblestone streets and among ancient structures are boutique hotels, a dizzying amount of shopping options (everything from local markets to high-end jewelry stores), and quality restaurants serving both local and international dishes. Hidden behind traditional stone walls, hotels offer guests delightful rooms decorated with Andean handicrafts and simple beds covered with down comforters. Unexpected spacious interior courtyards are common, as well as balconies offering spectacular views of Cuzco’s orange tiled roofs that crawl up the surrounding hillsides. One of the most popular places to stay is the charming art district of San Blas with its narrow, zigzagging streets and colorful characters.

Cusco was the site of the historic capital of the Inca Empire and was declared a World Heritage Site in 1983 by UNESCO. Cusco is a beautiful city riddled with contrasts between the indigenous styles and the modern western world. It is these contrasts that have given Cusco its rare beauty.

Most visitors are keen to get to Machu Picchu, either by trekking for 4 days along the Inca Trail,Salkantay or by 4 hours on the train, but Cusco itself has a lot to offer the visitor and most travellers usually end up seduced with this vibrant city and stay longer than first planned.

The first thing that hits the newly arrived visitor to Cusco are the Inca walls; enormous granite blocks carved to fit together perfectly without the aid of mortar beds. Many of the walls were simply built upon during the construction of a new Spanish city. Its a tribute to the Incas that their anti seismic design has survived the test of time while the Spanish colonial architecture has been rebuilt several times following a wave of earthquakes that have hit the city.